Background For This Blog 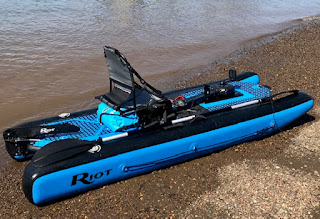 While unboxing and setting it up, I made videos - which I plan to post here in the coming weeks. Thereafter I'll post info about my first usage.  If anyone has videos or information they would like to add - please get in touch.

Be aware that the shipping box identifies it as the Mako Air 8.5 - and that is its correct length notwithstanding it being called both 9 and 9.5 in various promotionals. It is also 36" wide notwithstanding the company’s own web site info (here - as of March 28, 2021, the specifications had been corrected but the photos were still of a preproduction model that includes fishing rod holders). In addition, I was told by Next Adventures' staff that none of the ones shipped to them came with the carrying case, the paddle leash, nor the rod holders (the photos on Riot's Teaser (previously here but as of March 28, 2021, it had been removed - maybe because I contacted distributor - more on that in separate posting) show rod holder mounts which are also not present).  I'll update here on Riot Kayak's response to my inquiries about obtaining the missing parts.  It also didn't come with any instructions - though it was easy to assemble and tools are included except for a needed philips head screwdriver. If any owners read this, please get in touch so we might start a owner's group. I am looking forward to enjoying it - and I am not a fisherman - but happy to have all who are interested in the Riot Mako Air represented here.

Happy to answer questions - please write to me at mymakoair@gmail.com